What is Singles’ Day?

University students in Nanjing, China started celebrating Singles’ Day, or Bachelors’ Day, in the 1990s. It’s a day single people get together to party, but over the last few years, it has also turned into the biggest online shopping day in the world.

Why should you care?

According to the New York Times, on Nov 11, 2013, online shopping companies in China processed more than $5.75 billion in sales, two and a half times the total of Cyber Monday 2012. Alibaba, the biggest online retailer in the world, reported 402 million unique visitors and shipped out 152 million packages for the day. As an online shopping company, directing a percentage of those users to your site could do wonders for your annual revenue. 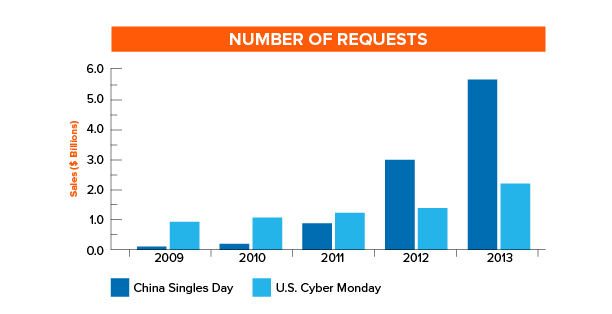 What do I need to do?

Now that you have decided to jump in and fight for a piece of the pie, how should you go about it?

First and foremost, the importance of hosting your site WITHIN Mainland China cannot be understated.

A recent study done by Catchpoint showed that sites with a .com (outside China) versus a .cn (inside China) domain could take up to 20 seconds longer to load or simply be unavailable. 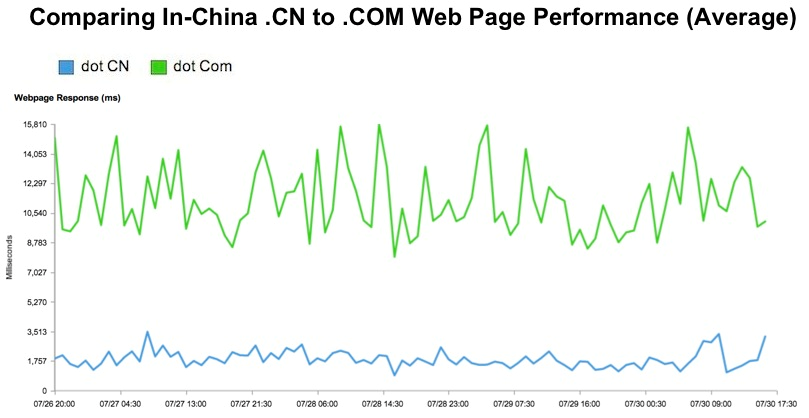 Why does performance matter? Sites with poor performance and bad user experiences often see shoppers give up or simply go to a competitor site, resulting in what could be a dramatic loss in revenue.

Some companies place their servers close to China in countries like South Korea, Japan, or Hong Kong to avoid dealing with the Chinese government, but by doing so, you still have to deal with the infamous Great Firewall of China. Many of these companies still suffer poor performance on their sites.

Is hosting your web servers in China enough? The answer is no; you need to have your entire IT infrastructure in China, including your CDN and DNS servers for optimal performance.

Now that we have figured out where to put our servers, are we all set with performance? Not just yet, there are couple more pointers from that study:

Almost there, but you’re not done yet

Now that we have discussed performance, let’s talk about your site. Remember, Chinese people have a very different culture than Americans, so there are a few things you need to consider to make sure your site is Chinese friendly.

A Chinese language site is a start. Hire PR and design firms within China to do promotions and design of your site. And having Chinese speaking support personnel is a must; there are over 290 living languages in China, but Mandarin is the official and most prevalent.

Another area that needs to be addressed is your payment systems, which need to be able accept what is popular in China. Alipay is the biggest online payment service in China (think the way that PayPal is used as an alternative to credit cards here in the US), so that is a must. For credit card payments, make sure you accept Chinese bank issued credit cards, as most Chinese citizens do not own those issued by foreign banks. Finally, believe it or not, COD (Cash on Delivery) is still very popular in China, so you’ll want to set up systems to accept that as well.

Inventory and delivery methods need to be considered also. Chinese consumers love luxury brand items like designer shoes, clothing, and accessories, and once they set their sights on an item, they want it yesterday. They also like to buy in large quantities, so make sure you have enough inventory of the popular items. It’s also best to store them in a warehouse in China rather than ship from outside the country, as you don’t want your shipment to get held up in customs.

Content is another big thing to be aware of, especially given the censorship issues that businesses operating in China often have to consider. You don’t want to do a huge promotion for the Dalai Lama’s autobiography unless you want your site to be blocked. So monitor what gets on your site; avoid any content that could be considered pornographic, gambling-related, or most importantly, political.

Oddly enough, you must also be backwards compatible and flexible with your website, because a huge portion of the internet population in China still uses old browsers or browsers from Chinese companies. Make sure they can see what you’re selling. 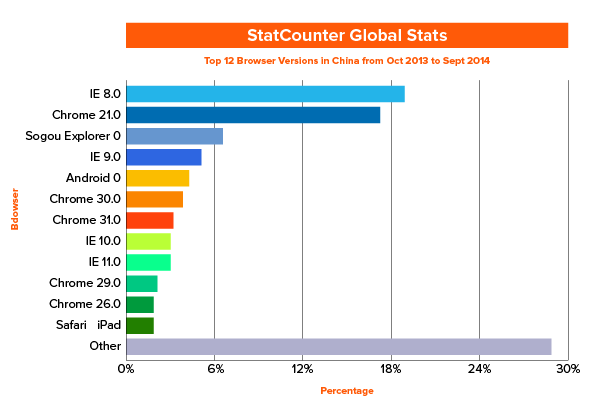 Lastly, set up ongoing load testing and performance monitoring for your site. The Chinese government can block your site without any notice, so try to have a reasonably short TTL on your DNS setup so you can make changes on the fly. Be sure to also have a more lightweight alternate site ready to take over should any problems arise (even aside from China, this is a good way to handle site failures regardless of circumstances).

The complexity and difficulties of hosting a successful online shopping site in China can cause doubts in any CTO’s mind, but if you take the time to do your research and planning, the reward will be well worth it.