Cloud infrastructure refers to all the parts that make up a company’s cloud network.

These parts can include:

• Processors, memory, and storage—physical servers are often split into virtual pieces of compute and storage

• Internet, intranet, and VPNs—companies often use both public Internet and their own private networks or intranets

• Software and services—clouds often sell software that sits on top of the hardware which often includes databases, analytics, integration, and management tools

Maintenance is easier because another company manages, monitors, and maintains the infrastructure. So, it’s easier for a company to implement or get started with a cloud platform as it’s already built, and to use it, you must only create an account.

The history of cloud infrastructure

Though concepts like virtual machines were born in the 1970s and VPNs (virtual private networks—more below) were available in the 1990s—the cloud computing of today didn’t really meet its full ideation until 2000. Between 2000 and 2006, companies that survived the dot com bust needed to modernize their infrastructures.

In addition to modernizing infrastructures, cloud allowed companies to do more with less. They no longer had to hire large teams of engineers to deploy and support their infrastructure.

In 2006 Amazon moved its online book retail business and all other operations to the cloud and launched Amazon Web Services (AWS). What started as a small leap of ingenuity, became the world’s largest provider of cloud-based infrastructure.

The open source movement, which made source code of any open-source application free to any developer, also increased cloud popularity. Developers could rapidly deploy open source code on the cloud. Over time cloud providers like AWS also started offering pre-configured open source software packages. Open-source was attractive to programmers as it allowed them to modify code in this new era where cloud infrastructure was controlled by the vendor.

The open source movement and cloud services, like AWS, grew in both size and popularity. Netflix joined AWS and made millions from subscription-based entertainment in the form of movies and TV shows. User friendly, inexpensive, and convenient, Netflix took over the video rental space in record time. Their subscription base grew to millions quickly. Netflix relied on AWS to support the rapid growth of their streaming business. Soon, companies like Adobe, Samsung, SAP, Sony also adopted AWS.

In February 2008 Microsoft announced Azure, their own public cloud platform, under the codename of "Project Red Dog". Then in April 2008 Google launched a App Engine, a precursor to Google cloud, that allowed users to run their web applications Google infrastructure.

The rise of SaaS

Shortly after the growth of AWS and the open source movement, SaaS (software as a service) gained massive popularity. SaaS meant low costs, quick implementation, and accessibility. Users don’t need to manage the hardware and software of the application. Instead, users sign up, login via browser, and voila—they’ve got a new software application.

Office 365 is the epitome of SaaS. Most people are familiar with the evolution of Office, in all its incarnations. While versions on disk still exist and can be found in basement boxes and the bottoms of office drawers, people access new Office products are now via the Internet.

Rather than pay for the software once and then pay to upgrade, a subscription fee incorporates upgrades into the service. So, instead of needing a new disk to install the latest version of Office 365, employees simply upgrade via their web browser when Microsoft releases a new update.

The parts of cloud infrastructure

Cloud infrastructure is like physical infrastructures—there are multiple parts that make up a whole. Servers still exist, but they are decoupled from customers. Customers don’t rent servers. Instead, they rent compute, memory, or storage.

Routers communicate with the servers and the intranet and Internet. VPNs, which make private networks available via public networks, are added for virtual access to servers, which increase security.

Companies, their products, and customers rely on cloud infrastructure

Cloud adoption means that a company’s product depends on the uptime, availability, and good performance of cloud products.

For example, Netflix depends on Amazon Web Services (AWS) to keep its customers happy. If customers can’t access Netflix, it could be due to an AWS outage.

These dependencies don’t stop with cloud providers. With a huge amount of open source and customizable software available via cloud, companies started integrating different systems into their own applications and products. That meant that their customer’s experiences depended on the performance of these third-party systems integrated into their own products.

All these integrations and dependencies on cloud solutions make today’s SaaS products more vulnerable to outage and performance issues that directly impact their customers.

Security, uptime, and backups are top priorities in cloud infrastructure. Monitoring is the most efficient way to enhance performance, improve security, and avoid downtime.

Since a company’s infrastructure is vital to daily operations, it is essential to get ahead of any potential performance or security issues that would cause downtime or an outage.

To get ahead of issues companies must use monitoring software to catch problems before they impact customers. Digital Experience Monitoring software tracks and reports on the performance of predetermined pieces of a company’s infrastructure.

To monitor cloud infrastructure, companies need to use synthetic monitoring and real user monitoring (RUM) to watch user behavior and to alert IT admins to potential problems and threats to user experience.

Cloud infrastructure includes all the components that make up an organization’s cloud system. These parts can range from hardware like a computer processor or a server for storage to software pieces like a web-development platform.

Digital Experience Monitoring is vital to the health of cloud infrastructure because it’s so complex, housing many different parts, many of which are from multiple third parties.

Start a TrialView a Demo 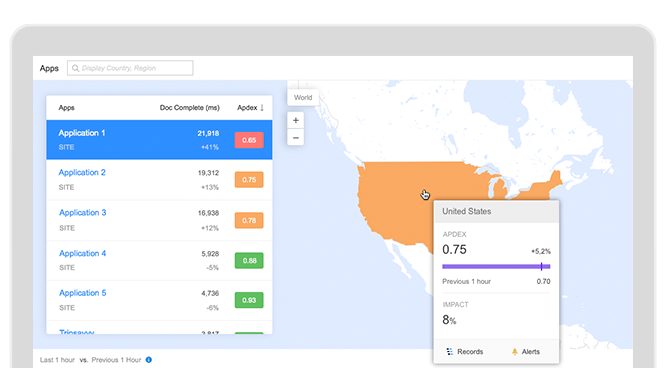