In nearly every new version of Chrome, there are notable updates, bug fixes, and new features added to the new version. This often requires developers to change their code to accommodate the new changes so that the performance, reliability, and user experience of their website can be maximized.

In 2009, Google announced a release system with three channels – Developer, Beta, and Stable. The Developer channel updates once or twice per week with new ideas and features; this channel can be very unstable at times. Beta updates monthly, with stable and complete features migrating from the Developer channel. And the Stable channel updates quarterly, with features that have been tested thoroughly in the Beta channel.

For years, testing websites in different Chrome versions has been inconvenient. The majority of Chrome users have installed the Stable version of Chrome, and until recently, it was not possible to install Chrome pre-releases on the same computer as Stable Chrome. This meant that developers had to choose whether to test their site in the next version of Chrome or the current version. For instance, Chrome 63 allows the import of JavaScript modules dynamically. This allows scripts to lazy load at runtime and thereby improve the application performance. However, without the easy accessibility to the different Chrome versions, testing new code is difficult for developers.

We understand the need to test performance across different browser versions, which is why Catchpoint users can now run tests using the Chrome version of their choice. Chrome 53, 59, and 63 have been made available for various tests including Web tests, HTML tests, and Transaction tests.

The Catchpoint Chrome versions available for testing are as follows:

It’s important to note that the three Catchpoint versions are not to be confused with the different Chrome versions mentioned above. Our stable (lower-case s) version is not the same as the Chrome Stable (upper-case S) version. The stability of the Chrome version is related to the Catchpoint product. The stable version will be an older one because of the time taken for testing a specific version to ensure it will not have a negative impact. We thoroughly test browser versions to ensure the browser will not result in differences in the measuring of performance metrics, test failures, triggering alerts, etc.

Stable and Preview will be updated with the latest Catchpoint-supported versions. However, choosing Specific will not automatically update when Catchpoint releases a new version of Chrome. Catchpoint also allows users to run instant test on different Chrome versions. The version of Chrome chosen in the test can be seen in multiple pages like waterfalls and error list. Users can see what different versions their Enterprise node supports as well.

Some examples of where you can see and configure the Chrome version. 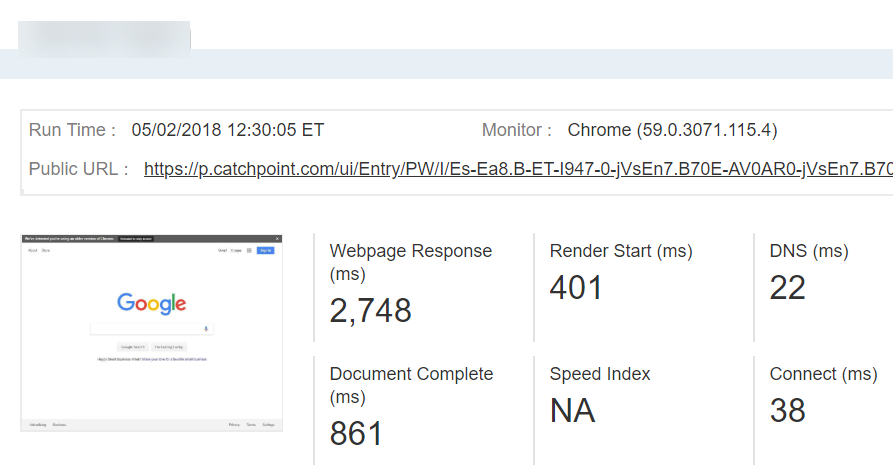 To summarize, Catchpoint has eased the work of testing and monitoring your applications on different versions of Chrome by providing this new feature. You can easily try out different chrome versions without much effort in order to determine what testing strategies work best for you and your organization’s monitoring needs.

By: Julie Freckleton and Asha Shivappa