Following Leicester City’s remarkable win to clinch the Premier League title on Sunday, we decided to rank each of the 20 Premier League Clubs based on their website’s performance, and do a quick analysis of the top four and the bottom three.

Ranking based on Document Complete metric for UK users:

Newcastle is showing Championship winning form on their Web Performance (but, they could still get relegated in the Premier League).

Having an average time to first byte of about 370ms and an incredible time of 730ms for Document Complete, Newcastle takes the top spot with an unprecedented 2700ms Webpage Response time.

Liverpool came in a distant second spot with great performance of 1022ms render start, and a decent overall WebPage response time of 3269ms.

Looks like it’s a one-man team relying solely on their document complete metric to get them to the top (Steven Gerrard, anyone?).

Coming in at a close 3rd spot with just a 52ms over Liverpoool is Manchester United. With table topping numbers in their time to first byte, an unbelievable 79ms, and a league benchmark of 595ms for render start, they look to be the all-rounder champion. Closing out with another great 2974ms on webpage response times.

Having just missed out on the real Premier League, the Spurs complete the Top 4 in Web Performance with a great time to first byte of 134ms and a very good render start time of 1116ms.

With the base page downloaded in just under 176ms, the overall webpage loads in a respectable 3722ms.

Perennial relegation flirters, Sunderland find themselves in the relegation spot in Web Performance as well. A poor base page download times of 575ms is compensated by a respectable 1102ms render start.

But, with a very poor 5378ms document complete bettered only by their even poorer 7409ms webpage response times, Sunderland is in trouble.

With a very poor 5907ms document complete, Everton’s poor numbers are challenged only by one other team.

An overall bad performance of 1701ms render start and a below the average 6866ms webpage response time, Everton is struggling to stay afloat.

With foot of the table performance on every front, Man City are rightly at the bottom of our Web Performance League.

With an astonishingly 6000ms slower in document complete than the champions, very poor render start of 1961ms, and having the slowest website with a 8724ms WebPage response times, Manchester City are going down.

How can we not mention Leicester City, the newly crowned Premier League Champions?

While they seem to have football mastered this season, they have some catching up to do on their Web Performance. An incredible 89ms base page download time is offset by a slightly poor 4430ms document complete.

With a below average 5702ms webpage response times, Leicester has some serious training ahead of them in the Web Performance Premier league. 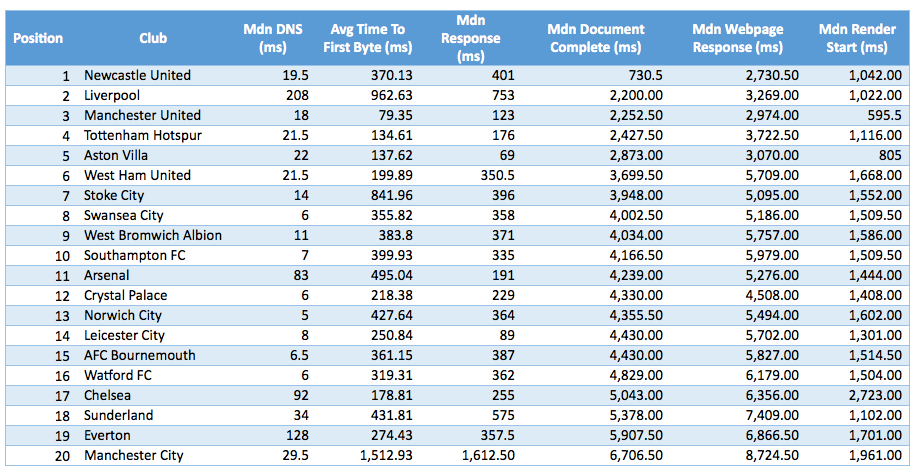 Will Black Friday 2020 be the Same as Previous Years?