Though much of the hoopla from last Thursday’s Republican Primary debate has died down, pollsters and talking heads are still delving into the aftermath of the candidates’ performances and how it might affect their popularity numbers going forward.

We, of course, are interested in far different metrics.

There’s no doubt that a political campaign is essentially a specialized marketing exercise, a key component of which is the candidate’s official website. This is the tool with which they can outline their policy positions, portray themselves as a true man or woman of the people, and make at least an introductory case for why you should give them your support (and money).

Back when he first ran for president, Barack Obama proved the value of a slick, well-constructed website, which he used to raise a great deal of money from everyday voters, capitalizing on what previously was a largely untapped resource.

Given the size of the current GOP primary field as well as the roughly seven months that we still have until Super Tuesday, we figured that viewers tuning in to the debate would need a little extra information to help them learn more about the different candidates, and that those official campaign websites would see an uptick in traffic – and perhaps a degradation in performance – as a result.

Before we get to the web tests that were run during the debate, some special dubious recognition must be given to Governors Scott Walker and Jeb Bush, both of whose sites offer up such data-heavy videos that the total content exceeded our test’s limits. Walker’s site has a video of over 7 MB that must be downloaded, and Bush’s has one nearly double that – 13.7 MB for one video! Huge sites like these are going to be extremely susceptible to performance issues, particularly when network bandwidth is limited.

Therefore, we eliminated those videos from the tests to see how the rest of the sites performed, though it goes without saying that Bush and Walker were clearly starting from behind. That being said, let’s see how the different sites fared from 3 pm EST (four hours before the debate started) through noon of the following day:

Here we see that just as the Donald is leading in the polls both before and after the debate, he also has arguably the most savvy web design team. Trump’s site loads faster than anyone else’s (beating out Marco Rubio by a nose) due largely to the fact that it’s roughly half the size of the second-smallest one, that of Dr. Ben Carson. Interestingly enough, the median load time of Marco Rubio’s site is literally slower than Trump’s by less than the blink of an eye despite the fact that his is the largest by far of any of the other candidates. This indicates some smart performance optimization strategies on the part of Rubio’s webmasters.

Other notable highlights from this First Debate round of tests: 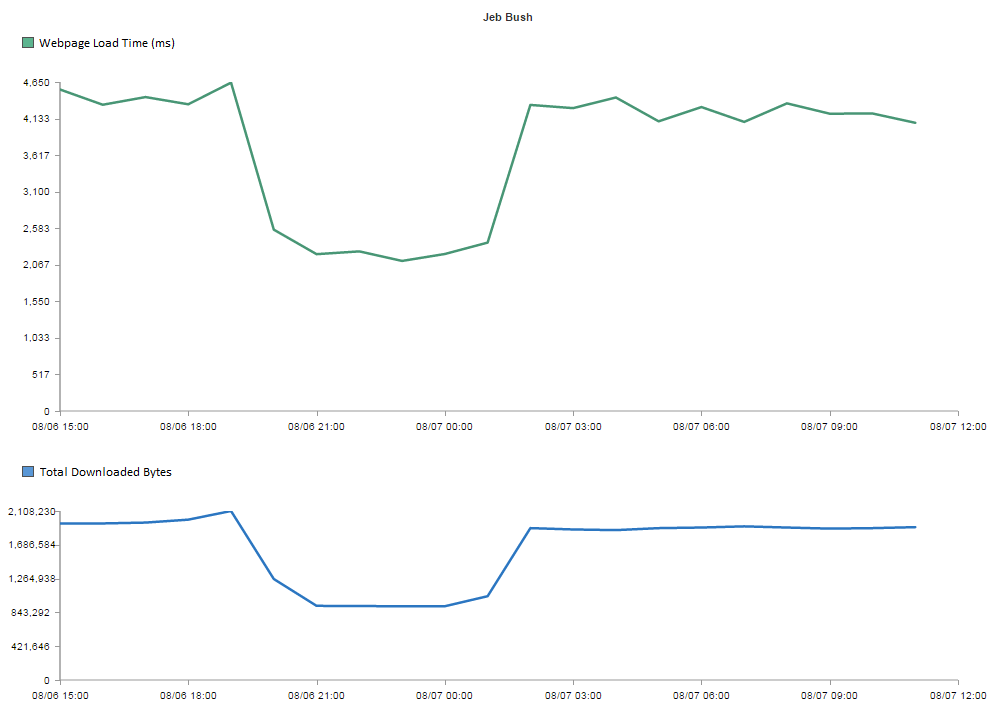 We’ll continue to monitor all of the candidates’ sites throughout the Primary season, so stay tuned for more updates in the near future.