Response, or the time it takes to load an HTTP request,  is never the same twice, of course: sometimes sites load fast, and sometime slow.  It is the distribution of times which is of interest.   The distribution tells us the probability of every possible response measurement: from 0s, to 1 ms, 2ms, and so on up to some cut off which we designate as “Too long.”

This distribution forms a picture (see below), from which we could calculate any probability we desired.  Think of the bell-shaped curve of a normal distribution to get the idea. 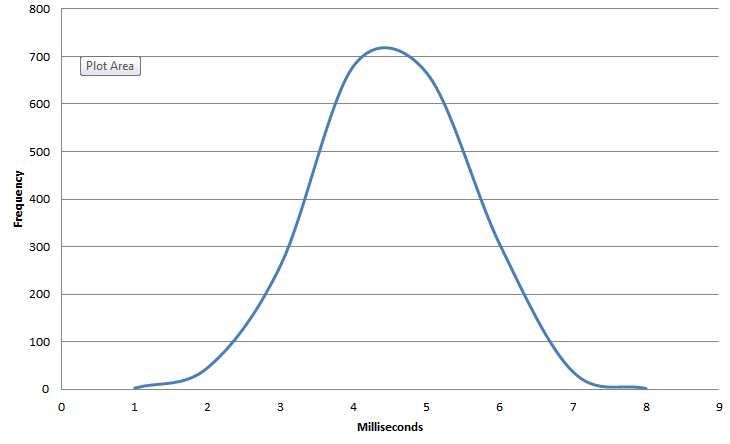 Storing and looking at complete distributions, especially for many different response measurements, can be very expensive and time consuming.  Therefore, it would be nice if we had a way to quantify an approximation to a distribution.

If we laid out each (whole number) percentile—1 through 99—then we’d have a near perfect approximation of the entire distribution.  But that is too many numbers to look at.   Typically, we’re only interested in the poor performers, so we pick a few top percentiles, like the 85th, 90th, 95th, and 99th.

Now suppose a particular response measurement is symmetric around its median.

A distribution is symmetric if each percentile less than the median, and 100 minus that percentile, are equidistant from the median.

For example, if we are comparing response measurements from the same URLs measured at different geographical locations, which we have determined are approximately symmetric with roughly equal averages, the one with the larger standard deviation will have longer response times.

But even if the two response measurements are symmetric, if they do not have roughly equal averages, then it is not clear which of the two will have longer response times, even if one has a higher standard deviations.

Here is an example from the same 5K image loaded from two separate locations, New York City and Miami utilizing Catchpoint’s web monitoring service.   NYC is black, Miami orange.  This is a picture of the full distribution of response times in milliseconds from over 4,000 measurements of each location: don’t miss the log axes. The medians have been indicated with dotted vertical lines: 3 ms for NYC, and 16 ms for Miami. 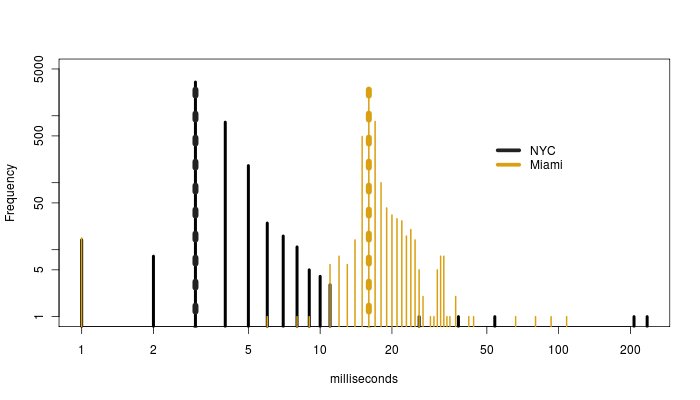 The danger of limited reports is apparent.  The 95th and 99th percentiles are 5 ms and 7 ms for NYC and 19 ms and 25 ms for Miami.  A first glance using the numbers thus far would indicate that Miami is slower.   It isn’t until the 99.99th percentile that we see that NYC with 223 ms is much larger than Miami’s 101 ms.  It is lose anomalous large values for NYC that drive up the standard deviation.

The answer to this article’s question is thus: no one metric is best.  You are safer looking at a broad range of reports to come to a conclusion.

Special thanks to Matt Briggs for his contribution to this article. You can learn about Matt by visiting his site: http://wmbriggs.com/

Catchpoint Web Monitoring Solutions provide several metrics to build a full picture of you performance including: Average, Median, 85th Percentile, 95th Percentile, Standard Deviation, and Geometrical Mean. At Catchpoint Systems we continuously listen to end users and talk to experts in the performance and monitoring fields, to better understand customer needs and figure out how to best solve them in our products.