The New Hampshire Primary on February 9 may have been a watershed moment in the 2016 US presidential election, with anti-establishment candidates Bernie Sanders and Donald Trump both rolling to big wins in their parties’ respective state nominating contests.

It was also a moment of truth for major American news websites with this improbable election generating intense interest from the US electorate and other places in the world. Many news sites however didn’t measure up to the increased visitor traffic.

External DNS was the culprit for ABCNews.com. The site saw DNS look-up times average out at 1,630ms during the late-night, early-morning hours of Feb. 9-10 plus DNS failures in San Francisco, Denver and Atlanta. That sent webpage response times as high as 15 seconds, or about three times the site’s median response times of Feb. 8-9. The site timed-out several times—no response after 30 seconds—during the DNS failures.

After steady webpage response times well below 1,000ms per host throughout the week, CBSnews.com started to slow down on Tuesday. The site draws content from 17 different hosts, many for advertising, and at least four of those struggled throughout the day and night Tuesday, culminating in one host that had response times of nearly 9,000ms early Wednesday morning. 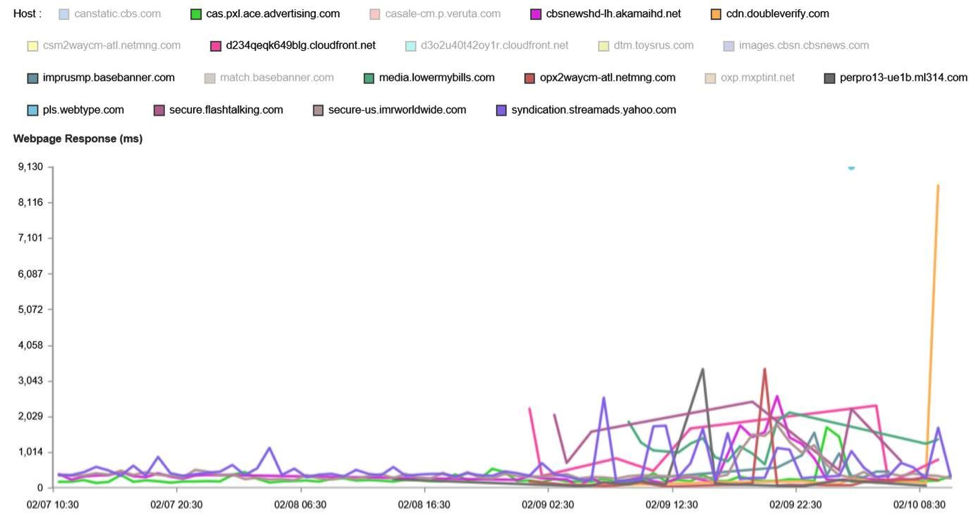 FoxNews.com was slowed down by third-party objects, from social media, personalization and advertising management services, from Sunday through Tuesday, with median webpage response times over 25,000ms. As the election results started to come in however, the site administrators took action, eliminating the third-party objects. The site’s performance stabilized in the 6,000-9,000ms range.

The struggles some media sites had point to the unique challenges this vertical faces. Media sites are heavily dependent on advertising for revenue, which means downloading advertising content from multiple web hosts. Under heavy traffic, this represents multiple points of failure. All the calls made to these hosts can slow sites down considerably.

In the FoxNews.com example, the problem was largely due to third-party tags for social media plugins (addthis.com), advertising management (mediamath.com) and personalization (bluekai.com). The site eventually turned these off rather than see them continue to drag performance down.

But that doesn’t change the fact that readers expect a rich content experience, including personalization, content recommendations and social media buttons. Advertisers want data on what users click on. Sites depend on advertisers for revenue and must hit multiple web hosts to generate advertisements on their pages. Even if they’re not completing complex transactions like e-commerce sites are, media and news sites still have a lot of complexities to manage, visualize and test against.

These sites can do all the capacity planning they want but if the various third-party service providers they rely on, whether for DNS, ad serving, social media tags or something else, can’t scale up to those capacity demands, site performance will suffer. SLA management becomes more important than ever.

As for the US election, the next big day is Feb. 20, when the Republicans hold their primary in South Carolina and the Democrats caucus in Nevada. As the plot thickens in this unconventional election year, the country’s top media sites will be in greater demand for content and information and will need to meet the challenge.