This post was co-authored by Greg Rubin, Mitchell Zelmanovich, and Andrew Smirnov

Football season has started once again, which means millions of people are glued to their TVs several times a week to watch their team play. This also means that just as many, if not more, are also logging on to their Fantasy League websites and apps to make last minute adjustments and check their results. Being in four Fantasy football leagues myself, I wanted to make sure all of my teams were updated and ready to go before kick-off. However, on Sunday the app had a different plan in mind:

After multiple attempts to fix the error by restarting the app and still getting the same message on http://games.espn.com/ffl/clubhouse, I decided to check ESPN’s Fantasy Sports Twitter page:

Feeling frustrated and defeated thinking my Fantasy season was over before it even started, I decided to investigate to see if this issue was affecting everyone:

This data showed me that this was in fact happening to everyone, not just me. The errors were due to connection failures: 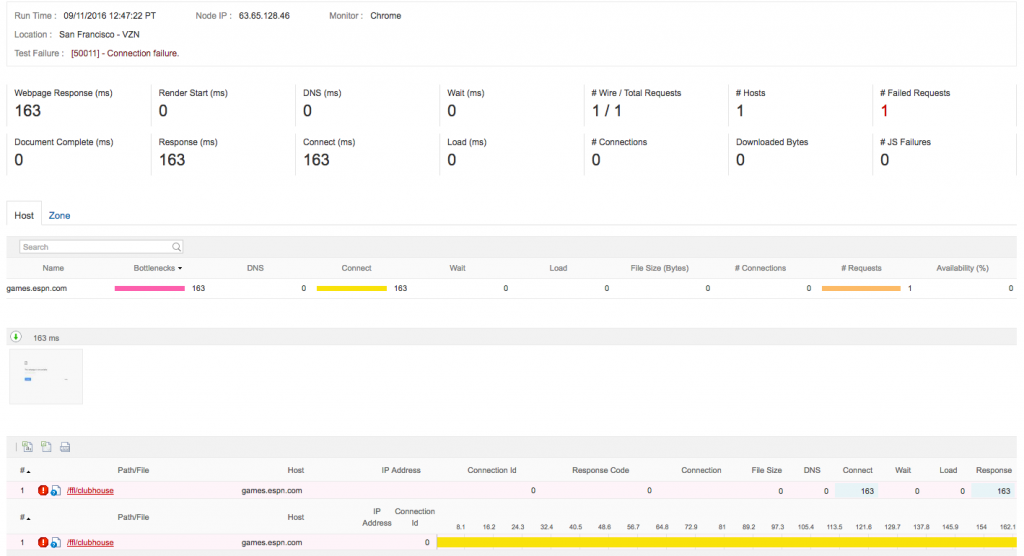 Recognizing that my test was just to the website, I decided to test the API as well. I was able to catch the end of the issue and its resolution:

On this test, I was receiving a 404 response from games.espn.com:

Synthetic testing is about watching and planning for things you know might go wrong. Hardly anything ever goes as planned in IT, including test results, so running web tests allows you to analyze data quickly when issues arise. So for those moments when the inevitable failure occurs, the combination of smart, fast alerting and a proactive monitoring strategy can help you detect and resolve problems before your users are impacted.

In the News – July 2021: Holistic Observability For Modern Applications