The world of online advertising has grown in increasing scope and complexity over the past decade. With the advent of customized ads based on an individual user’s preferences and browsing history, the advertising content seen by one user is often completely different from those seen by another user in the same basic location.

While this has been very beneficial for advertisers and ad serving companies such as DoubleClick, OpenX, and Atlas Solutions, it’s also created a significant challenge for the companies which host those ads on their sites. This is due to the fact that with so much customization in the form of personal data, the bidding process, etc., it becomes increasingly difficult to know what ads are going to be served, and thus there’s no way of testing those specific ads for performance metrics before they reach the end user. Running a synthetic test of a specific ad will produce limited actionable data because you simply don’t know who will be seeing it.

As a result, when an ad under-performs, Ad Ops administrators of those sites which host the ads have been left at the mercy of the ad-serving companies’ self-regulation and troubleshooting methods in order to come up with a solution to the problem.

The underlying principle of solving this problem is finding a way to emulate the kind of user data that ad servers collect and process in order to serve personalized advertisements to your end users. Of course, that is easier said than done. Fortunately, thanks to close collaboration with eBay, Catchpoint has developed a solution to this daunting Ad Ops dilemma thanks to its customizable scripting tool and global variables.

The first step in this process is to generate data which would otherwise be generated by an actual user. To do this, a test is run to collect cookie data from URLS of hundreds of popular consumer websites in order to emulate a real user’s online behavior. This cookie data gets stored in a database, where it can then be distributed to Catchpoint nodes in whatever geographic locations that you want to test from.

As you can see in these three performance charts, which show the page response times, total page weights, and number of objects on the page with and without cookies, the ones with the cookies included are significantly slower and heavier, which more accurately resembles the page that actual users will be viewing and interacting with on their devices. 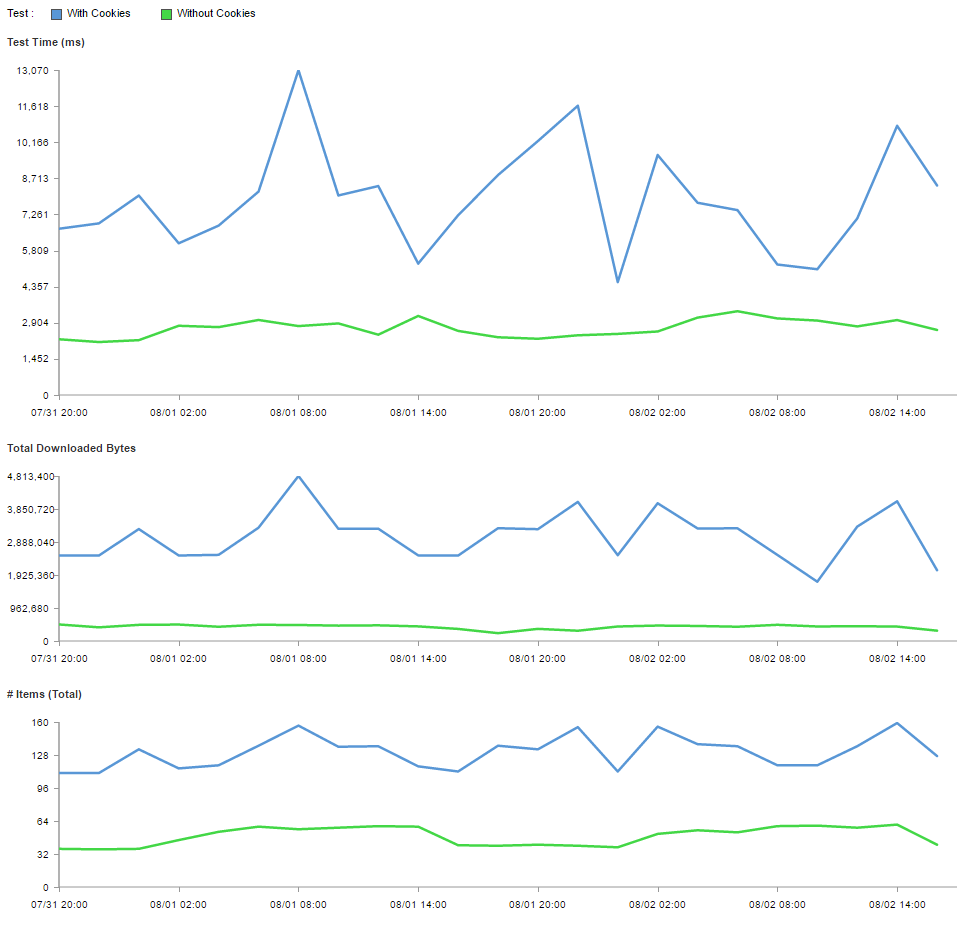 With all this data now at the disposal of the testing agent, it can now access all of the user profile cookies to trick the ad server into thinking an actual person has been using the computer, and thus generate a fully targeted ad through the normal ad bidding process. The ads are targeting what they think are real people, thus allowing the host to test and analyze the real performance of what users get in their browsers through an ordinary synthetic test.

This kind of emulated user capability is unprecedented within the performance analytics industry, and represents the kind of digital experience intelligence capability that puts real power in the hands of the IT Ops profession.