On our end, Catchpoint synthetic agents started recording 503 server response errors from http://www.nytimes.com at around 11:14 AM EST indicating that the web application was not functioning properly.  During the downtime, there were timeouts/reset errors from across the US, from Washington D.C. to Dallas to San Francisco.  The homepage was back up and running by about 1:38 PM EST.  A post hoc analysis deemed the root cause of the failure to be an issue during internal maintenance.

You Can’t Stop the PressesDowntime happens and it cannot be avoided.  To make the best out of a bad situation, I always recommend to communicate with your customers throughout the outage and try to be as creative as possible to keep business running – and that is exactly what the NYT did.   They kept their readers informed, not only using social media as a temporary platform to keep delivering the news but also to stay in touch and let everyone know they were working hard to resolve the issue. 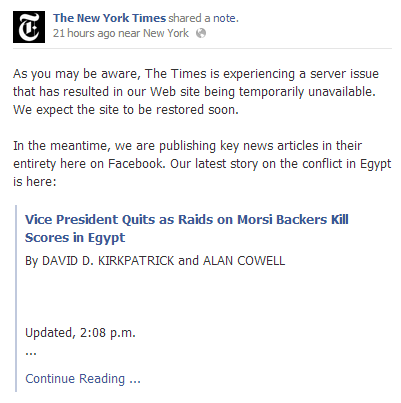 I commend the team for their swift action and grace during the downtime. From my time at DoubleClick, I know personally how stressful it can be — the office turns into a war room with everyone trying to triage and resolve the issue as fast as possible.  The NYT set an example yesterday that everyone should follow.  They deserve a pat on the back and a nice cold beer.

I bow to the Grey Lady.

Incident Review – The Third AWS Outage in December: When it Rains, it Pours

4 ways to use Catchpoint to drive remote workforce productivity