Google is on a mission to make the web faster. In 2010, they included page speed as a contributing factor to search rankings, but this focused only on desktop search results. Starting in July, they will be extending that to mobile devices. Mobile load times will now be a factor in determining mobile search results.

The search algorithm changes are expected to only impact the slowest pages and a small number of queries. The content on the page will still be an important factor, even if a page loads slowly. To ensure you don’t lose out on valuable mobile traffic, check out these tips to increase your mobile page load times.

Do you know how fast your mobile pages load?

Start by monitoring your mobile site performance from wireless providers to establish a baseline. Monitoring mobile pages from backbone or cloud locations won’t provide an accurate picture of how your site performs on a mobile device.

Reddit’s homepage was the fastest site to load on 3G at 19.8 seconds, which represents a 514% increase over their backbone response times. When viewing performance per city, the 3G connections show greater fluctuations while performance on 4G and backbone is much more stable.

Responsive and adaptive web design make your site compatible with both desktop and mobile browsing.

Responsive web design allows web pages to adjust to the operating system and layout of any browser, desktop, or mobile. The same HTML is served to all devices and CSS changes the appearance of the page based on the device.

With adaptive web design, the web server optimizes page rendering by delivering only the elements necessary for the experience on the user’s specific device and operating system. Adaptive resizes images and may discard elements like JavaScript or Flash, delivering a tailored version of the site to a user’s mobile device.

Adaptive sites have a performance advantage over responsive sites because they don’t download unnecessary elements.

In Is Your Site Designed for Optimal Performance, we analyzed the performance of 30 websites -15 using adaptive design and 15 using responsive design. The table below compares key metrics as tested from 4G and last mile Catchpoint nodes.

The adaptive websites loaded 40.2% faster on average as they downloaded significantly less content.

Consider the following if adaptive isn’t an option. 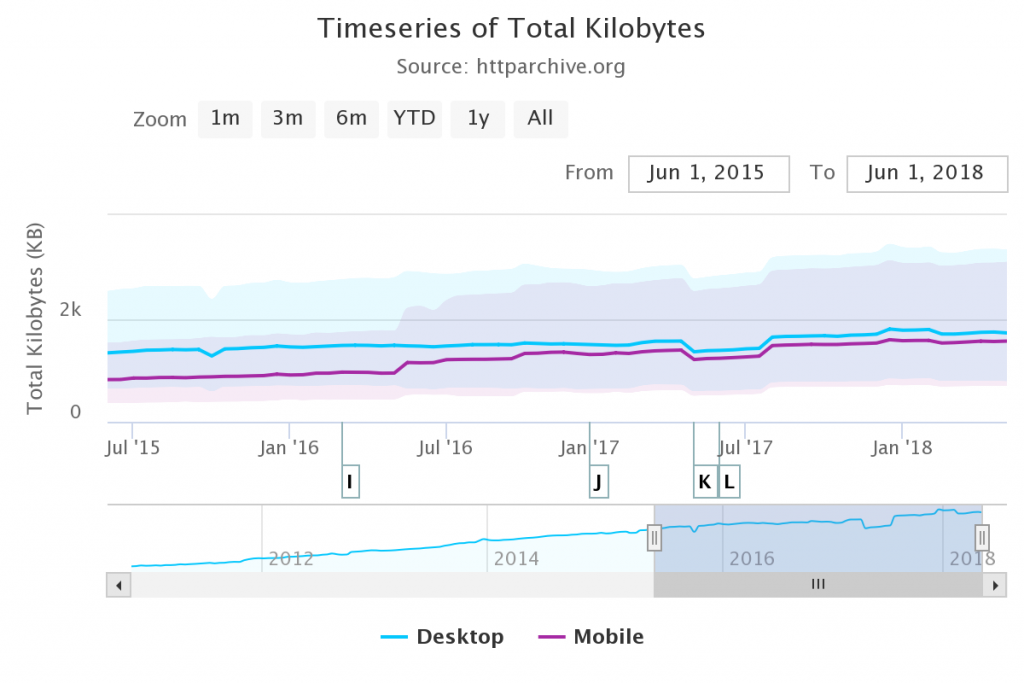 For the media sites, all except CNN have page weights between 1.1 MB and 2.6 MB. 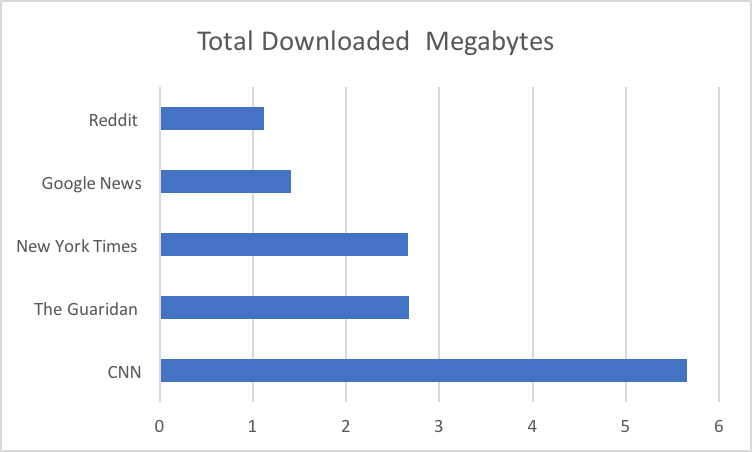 CNN is the outlier with more than 5MB of content downloaded to a mobile device. CNN does offer a mobile version of its site which is much smaller in size as there are no images. This version of the page downloads only 73 KB. 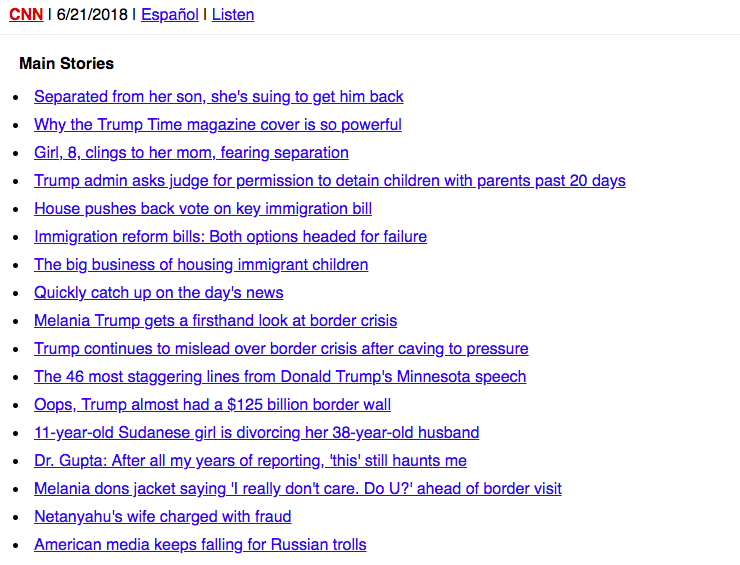 To reduce the size of files:

Third-party tags, whether for advertising, social media, or content services, are a potential pitfall for web performance. Just as the total weight of web pages has increased so have the bytes attributed to third-party elements. In The Performance Impact of Tags 2.0, we identified growth in bytes from third-party content of between 3% and 11% across multiple industries.

A greater number of hosts is an indicator of a greater amount of third-party content. 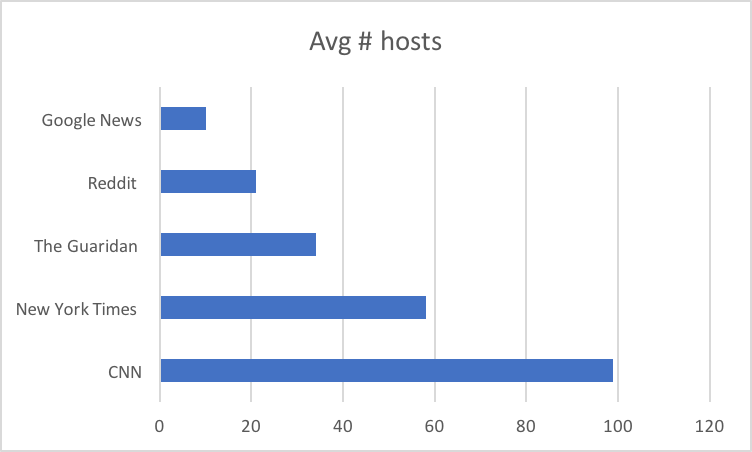 If third-party hosts slow down or become unavailable, your site slows down. Consider the following:

Delivering content across multiple domains, AKA domain sharding, was once a popular technique for improving page performance. Opening up multiple connections to retrieve objects in parallel addressed the shortcomings of HTTP/1.1. On mobile, this technique can hurt more than it helps. The overhead of additional DNS resolutions and TCP connections may penalize performance. The emergence of HTTP/2 has also made this technique less relevant.

When looking to improve mobile page response times, do some analysis to see where changes can be made and regularly test to see how those changes impact the user experience. Faster pages mean higher search rankings and happier users.

The number of connections made by the news sites varied considerably, and it is not a big surprise that the sites with fewer connections are the fastest performing sites on 3G and 4g connections. 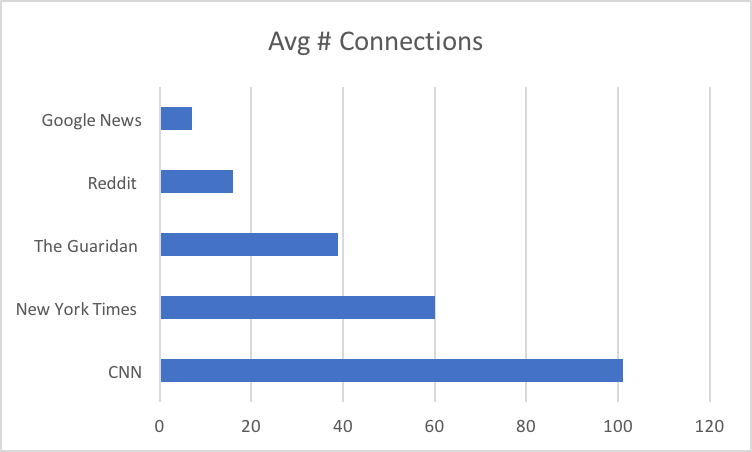 If search rankings are important to you (and chances are they are important to your company) make sure you are following these tips to reduce page load times on mobile devices. Continually measure the performance of your mobile pages from mobile devices and wireless providers to make sure you are delivering the best possible experience to your end users and your search rankings don’t drop.