Having worked at Doubleclick for so long, this topic is near and dear to my heart, so it goes without saying that it hit the spot!

It’s not just about the money. So much of the talk about ad blocking focuses on revenue and business models, that it becomes easy to overlook the real force behind this disruption: people want a better user experience, especially on mobile devices, but also on mobile data plans. The ad industry can solve this problem, but only if it stays focused on the real reason consumers use ad blockers.

Don’t listen to self-described experts who claim that people hate ads. They don’t. They hate waiting. They hate ads interfering with their user experience. They hate ads eating into their battery life, eating their data plans. These things are all related to performance, not content. If consumers didn’t notice ads causing a big performance drop-off, they wouldn’t invest the time and effort to block them.

Here’s a surprise, though: sometimes it’s not ads that hurt performance, but ad blockers. That was one finding when we looked at how a handful of prominent sites were affected by ad blocking recently. In a few cases, pages actually loaded slower when ad blocking was turned on. We used Pi-Hole, a DNS-based ad blocker, to test the difference by the way – so our methodology could have produced different results than AdblockPlus or another popular extension might have generated. But the point is still valid: you cannot assume that ad blocking will always improve site performance.

Even if ad blocking doesn’t always solve the problem consumers want it for, there are plenty of examples – especially in the news media – of sites that deliver worse user experiences because ads perform poorly and slow them down.

The industry needs leadership to focus not on the economic problem, but on the customer experience problem and the performance problem. The IAB is in position to take the lead here, set and enforce standards, and make sure that ads do not interfere with user experience, whether they’re part of ecommerce sites, news sites, or any other sites. Consumers aren’t waiting. They’re taking action and blocking ads, and if the industry doesn’t wake up and fix this soon consumers will have already solved it – and not in a way that the advertising world wants.

The following table lists the 20 mobile websites used for this study, with web page load times shown in milliseconds (ms). The sites which exhibited slower performance with ad blockers on are listed at the top in red. The other sites, with minus ( – ) signs in the Difference column, indicate how much faster the load time was with ad blocking engaged – which is one of its intended effects.

(with ad blocking on) 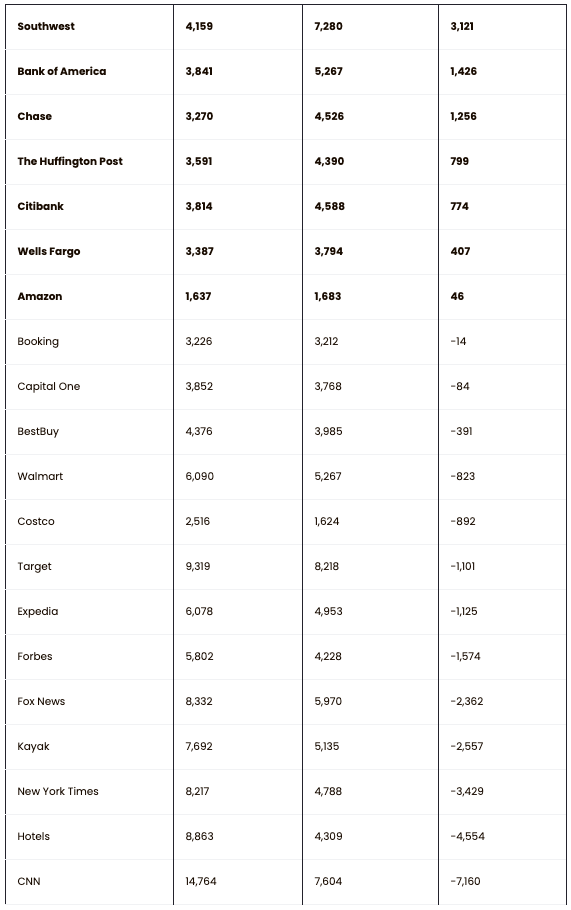