Holiday shopping season is upon us once again and we know what you’re thinking—”Already!?” While shoppers still have a month or so before having to worry about the dreaded holiday music haunting them every time they step into a store, retailers should already be in the final stages of their preparation. This is especially true for online retailers who want to avoid becoming a bad headline during one of the biggest online shopping weekends of the year.

As we kick off our Holiday Shopping Performance Prep series, let’s take a look at last year’s results.

Last year, IBM reported online sales on Black Friday had increased by 21.5%, of which 57.2% were mobile users, giving mobile traffic a 15.2% boost over Black Friday 2014.

An unexpected record-breaking factor last year came from tablets, which, for the first time, surpassed desktops in average order value with $136.42; desktops reached an average of $134.06.

Despite the boost in tablets’ average order value, smartphones were still the most common device for mobile shopping. Accounting for 44.7% of online traffic, smartphones delivered 20.6% of all online sales for that day; this is almost a 75% increase over last year’s event.

The significant increases in traffic made the blow from the outages that occurred that much more painful- just ask Neiman Marcus. The company’s ecommerce site suffered an outage that began early Black Friday morning and continued well into the next day. As if the outage wasn’t bad enough, an even bigger problem arose when they announced their site was back up and running with extended sales, when it was actually still down. This ignited a firestorm as customers attempted to access the promised discount and were, again, unable to reach the site. 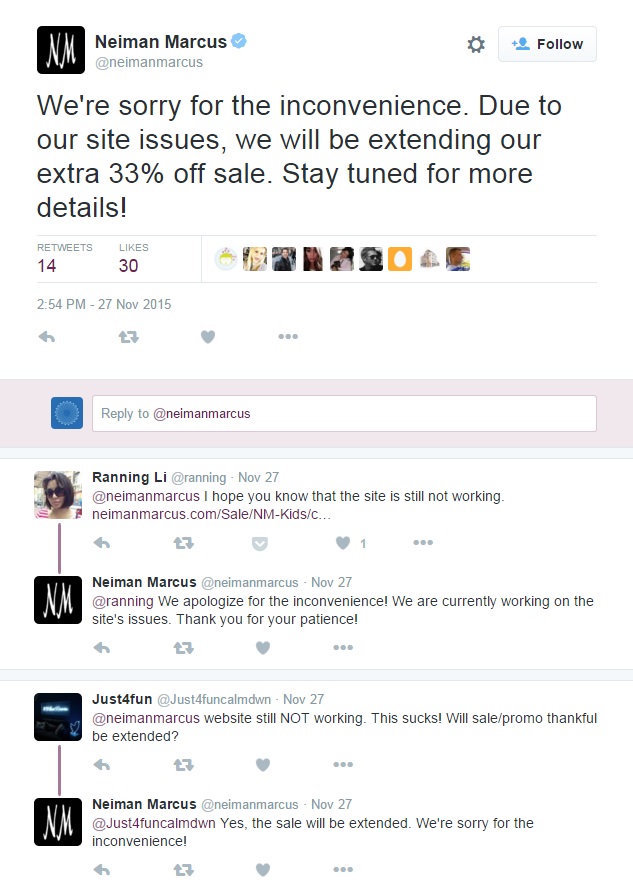 The performance problems weren’t just confined to Black Friday, either. Cyber Monday, which is the Monday after Thanksgiving, saw performance issues from major ecommerce companies including Target, PayPal, and Newegg.

Perfection is simply unattainable in the performance world, regardless of how well you prepare your site; therefore, planning to fail should be a key component of your performance strategy.

Over the next several weeks, we’ll be posting last minute tips and planning strategies to help you not only survive this holiday shopping season, but take control of it.