Last week we brought up the question, “How did end users learn to expect fast websites?” We covered how Pavlov discovered Conditioning through experiments with his dog, which left us wondering; perhaps humans are conditioned to expect instant web gratification.

Of Rats and Dopamine

Almost 100 years after Pavlov, Wolfram Schultz, now at Cambridge, stuck probes into the brains of rats and began to quantify the conditioning phenomenon in terms of neuronal activation.

Dopamine (DA) is a neurotransmitter in our brain commonly coupled with reward. Dopamine is released while you are eating an ice-cream sundae, when you win a prize, even during sex. Cocaine, nicotine, and other amphetamines all cause increases in dopamine transmission as well. Gamblers and other addicts all experience increased DA levels right before and during their favorite activities.

Shultz discovered deep down in our midbrain regions (the areas associated with reward), there are certain patterned firings of a population of Dopamine neurons to signal both reward and reward expectation. His lab showed that once a rat has learned association between a stimulus and reward – the activation of its midbrain dopamine neurons follow the same kind of conditioned behavior as well. 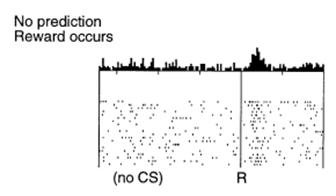 This graph shows normal baseline activity of rat Dopamine neurons.  At some point, R, a reward (sugar water) is given to the rat.  The probe in the rat’s brain detects a spike of activity immediately following the reward. 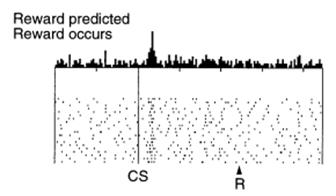 At this point, the light itself is the perceived reward. Now, the actual reward is “guaranteed” to follow (or at least that is what the rat has learned).  This is the underlying mechanism that caused Pavlov’s dog to salivate at the bell.  The dopamine response to the stimulus has already triggered a downstream chain of physiological reactions to get prepared for food.

* It should be noted that the same amount of time passed on every conditioning run between the CS and the reward. 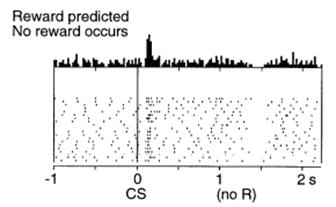 Here is where Performance Engineers and Ecommerce Directors should start shaking in their boots. When Shultz withheld the sugar after flashing the signal light, there was a drop in activity immediately following the exact moment the sugar-water should have been delivered. This temporarily precise drop is commonly referred to as the Dopamine Reward Prediction Error.

Shultz also found that delaying the reward by 500 ms, 1000 ms, and 2000 ms also caused the same depression in activity (right after the reward was supposed to be delivered) followed by a new spike in activity once the reward was delivered. So the rat’s neurons can also detect slight latencies in the delivery of their reward as well.

These two studies might just show that unconsciously, our brains have conditionally learned when a webpage must load and we possibly experience a burst of dopamenergic neuronal activity after the pressing the GO button. Does this mean that there is a dip in activity when the website takes longer than we expect? Who knows what cascading set of events the drop in Dopamine activity trigger. Perhaps its web stress, perhaps its frustration, perhaps it’s like an addict being denied their drug fix.

If the user expectations are determined by Conditional Learning, where did we learn that web sites are supposed to be 3 second or faster and why is the expectation changing? I suspect that the most popular sites we use the most are driving this learning behavior! The Googles, Yahoos and Amazons of the world, who have the technology, infrastructure, investment, and man power to continue to make their websites faster, do so and spend great effort leading the way. Additionally, the web has changed completely since dial-up and webpages are now getting delivered at speeds of 1 Mbps to 100 Mbps.

Another remaining question is how much impact does other knowledge/outside influence have in this learning. Is querying for a keyword in a search engine a different signal than clicking “Submit Order” to process your credit card on an ecommerce site? (Most of us don’t mind that it takes a little longer.)

Behind the scenes, our brain has learned how fast a page should load and can detect slow ones – even a delay as little as 250 ms. There are still a lot of open questions regarding what factors are involved in this learning behavior, how much learning from one site transfers to another, what is the impact over time, and what are repercussions of a negative experience. We clearly need for more scientific research in this area to understand our new digital lives and how we can trick the mind to overcoming these speed trap pitfalls.

Video Observability: Videoconferencing Runs the World—Here’s How to Make Sure Yours Keeps Running