If you found yourself struggling to access one of your favorite sites this morning, there’s a good chance that DoubleClick was the culprit.

The Google-owned adserver experienced a significant outage between the hours of 8:45 and 10:30 EST on Wednesday morning, and as is often the case with third parties that have large footprints across the internet, the results spread far and wide.

DoubleClick provides ads across a number of different hosts, and as you can see from the following charts, several of them went offline around the same time:

What happened next was a perfect example of why we are always impressing upon people the importance of being vigilant about the third parties that are hosted on their sites; not only who the third party is, but how their tags are built into the backend.

Well-known eCommerce and news sites saw their performance and availability suffer tremendously as a result of the DoubleClick ads that they’re hosting. Users and customers of well-known and trusted brands such as Amazon, Walmart, and Fox News were either forced to wait far too long for the page to load, or it was simply unavailable. 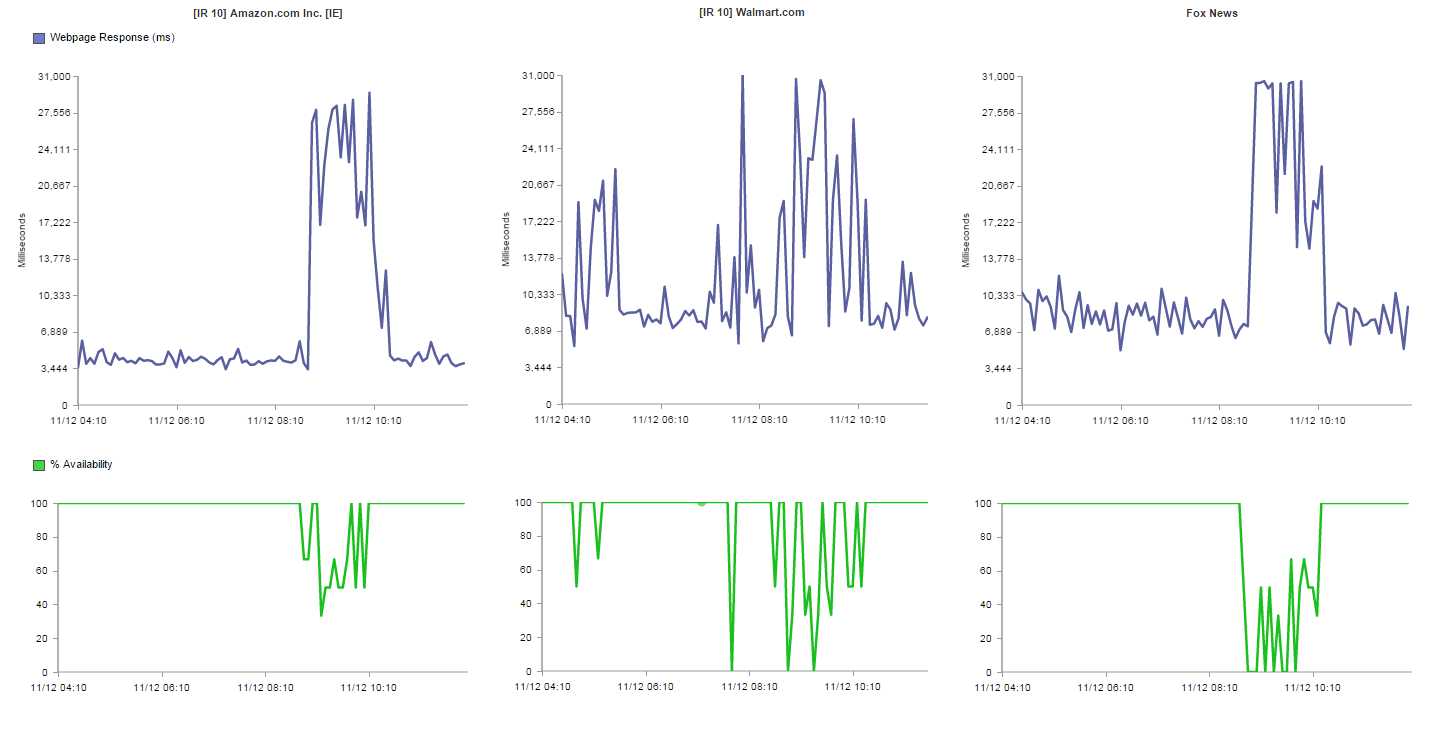 However, other sites, despite also having DoubleClick hosts which went down, didn’t see nearly as much impact. Take a look at three more examples, these from Best Buy, Sears, and ABC News:

The likely reason that these sites saw minimal impact from the outage lies with how they built the tags into their site. As we have advised in the past, placing these tags after document complete (the point at which users can interact with the page) means that people will still be able to click through to the links that they want without any impact — and make sure to use asynchronous tags! DoubleClick does support those calls.

Obviously DoubleClick is a well-known entity that has built a solid reputation throughout the industry. However, given our past experience working for them, this sort of performance issue is unfortunately not surprising. It highlights the exact reason why any company that hosts its tags as a third party on other sites have to be especially vigilant of their own performance, and those hosting sites have to be vigilant in turn about not letting someone else dropping the ball affect their own users.

The bottom line is that we certainly don’t envy whomever is in charge of DoubleClick’s SLAs today. They’re going to be working overtime tonight.

PS: I was not involved this time in taking down DoubleClick. I promise!

Catchpoint In the News – December 2021: The One Where We Predict Things